“It was amazing to have a normal looking foot without pain.”

For Carrie, a 68-year-old retiree in South Florida, bunions were a way of life, having developed on both of her feet decades ago. Although she spent approximately thirty years in discomfort, the pain was often intermittent and manageable. This was a stroke of good fortune given that Carrie worked in retail for her entire career and was constantly on her feet. Because it was important to exhibit a certain style while on the job, Carrie often wore shoes that exacerbated the problem. Outside of work, she became increasingly self-conscious about her bunions’ unsightly appearance and frequently covered them up, even when she was at the pool or the beach. As the years went by, the bunion on Carrie’s right foot became more pronounced and problematic.

By April 2018, Carrie had had enough. Tired of the discomfort and ready to improve the appearance of her foot, she went online to Dr. Adam Katz’s website (a physician who previously treated her for a bout of plantar fasciitis) and noticed he was performing Lapiplasty® 3D Bunion Correction™. Intrigued, she immediately made an appointment to learn more.

The Lapiplasty® Procedure returns the entire metatarsal bone to its normal alignment and stabilizes the joint, naturally removing the bump and straightening the toe. Unlike a traditional 2D osteotomy bunion surgery which focuses more on the cosmetic “bump”, Lapiplasty® 3D Bunion Correction™ addresses the true root cause of bunions by stabilizing the unstable joint at the base of the big toe and rotating the misaligned bone into normal alignment. The patented, titanium metal plates used to secure the unstable joint are designed to enable patients to get back on their feet quickly in a boot.

Carrie knew of other people who had had the traditional 2D osteotomy procedure in the past and their negative experiences had made her reluctant to move forward with bunion surgery. However, as Dr. Katz explained the differences between the two procedures, she felt much more at ease. A couple of weeks later, she decided to schedule the Lapiplasty® Procedure for her right foot, which took place in late May 2018.

Carrie began bearing weight on her foot approximately two weeks after the procedure and by mid-July was out of her walking boot and pain-free. Much to her delight, and for the first time in three decades, her right foot was straight.

“It was amazing to have a normal looking foot without pain,” said Carrie. “I am looking forward to finally wearing sandals again and am seriously considering having the bunion on my left foot corrected with Lapiplasty® 3D Bunion Correction™. After all, why should it be there if it doesn’t have to be?” 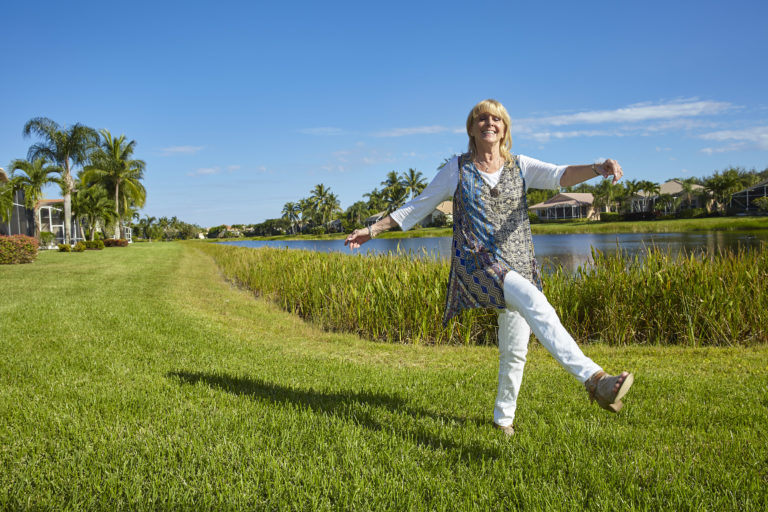 Only a surgeon can tell if Lapiplasty® 3D Bunion Correction™ is right for you and what level of activity you can expect after healing is complete. As with any medical treatment, individual results may vary and this experience is unique and specific to this patient only. There are potential risks with surgery and recovery takes time. Potential risks include, but are not limited to: infection, discomfort from the presence of the implant, loosening of the implant, and loss of correction with nonunion or malunion.

"I have been able to get back into the swing of things ... Every day, my foot feels better!"

Take the Short Quiz & Get Your Bunion Assessment

Answer 4 simple questions to see if Lapiplasty® 3D Bunion Correction™ may be right for you. We’ll send your results directly to your inbox.

You may be a candidate for the Lapiplasty® Procedure.

Thank you for completing the Am I A Candidate quiz. Based on your answers, Lapiplasty® may be right for you. Take the next step and find a local surgeon.

Use our convenient Find-A-Doctor tool to find a local doctor near you. See What Patients Are Saying

Unfortunately, you are not a candidate for Lapiplasty® 3D Bunion Correction™.

Still think you might be experiencing pain from a bunion?

Here are 5 symptoms to look out for that could make Lapiplasty® 3D Bunion Correction™ a good option for you:

Here are some helpful resources to help you learn more about bunions and your treatment options:

What Is A Bunion?

What Causes A Bunion?

What Are The Symptoms?

How Are They Diagnosed?

Will A Bunion Go Away?

If you feel you answered any questions inaccurately, take the quiz again!