“I can’t believe how quickly I bounced back after this surgery.”

While she had always been active, Jill Extract started running competitively when she was 49 years old. It became such a passion that she admitted, “If I cannot run, you do not want to be near me! My husband will attest to that!” Her exercise routine started by simply walking her chocolate Labrador around the neighborhood. She also supported a close friend who had a breast cancer scare by participating in a local Susan G. Komen Race For The Cure. She found she really enjoyed the rush of adrenaline and excitement she felt during a race. Now, at 63 years old, Jill competes in more than 15 to 20 road races each summer including 5Ks, half marathons, full marathons and even triathlons. Though she has competed in hundreds of races, you would never know that Jill suffered from a bunion on her left foot. For years, she ran through the severe pain caused by her bunion, which is a deformity caused by an unstable joint in the middle of the foot that allows the bone to move out of proper alignment. In efforts to alleviate her pain, Jill bought wider shoes and orthotics and would ice and massage her foot after every run, but those measures were eventually not enough to overcome the debilitating pain she felt on a daily basis. “I love to run every day, so the tipping point for me was when I could not even bring myself to run twice a week. Any time I would try to force it I would have to run extremely slowly, and even then I paid the price with severe pain afterwards. It completely took the joy out of running for me,” Jill explained.

When her pain got intense, Jill knew surgery was inevitable. When she finally decided it was time to learn more, she consulted Dr. Jason Miller from Foot & Ankle Surgery, Premier Orthopedics / Pennsylvania Orthopaedic Center. Jill was already familiar with Dr. Miller because he had helped her through prior running injuries and she knew he could advise her on how to correct her bunion. During one of her prior office visits, he described a new procedure called Lapiplasty® 3D Bunion Correction™ that is designed to correct a bunion in all 3 dimensions. During this procedure special titanium plates would be used to secure the root cause of the bunion – an unstable joint in the middle of the foot – which can potentially offer a quicker recovery compared to traditional 2D surgery as well as the ability to fix the bunion ‘right the first time’. “My big question was ‘am I going to be able to run?’ And, Dr. Miller was confident that my downtime would be minimal and my recovery time would be faster compared to traditional surgical approaches. I felt then that this was the procedure for me,” Jill said.

Following surgery with the Lapiplasty® Procedure in January 2019, Jill was non-weightbearing about 12 days, mostly due to some unique issues with her foot and the fact that Dr. Miller wanted to be cautious due to her extremely active lifestyle. Jill then transferred to a walking boot that she wore for about four weeks, and she was back in normal running shoes about eight weeks after surgery. To help get herself ready to hit the pavement again, she also participated in physical therapy, where she used an anti-gravity machine to help her get her normal walking and running stride back. 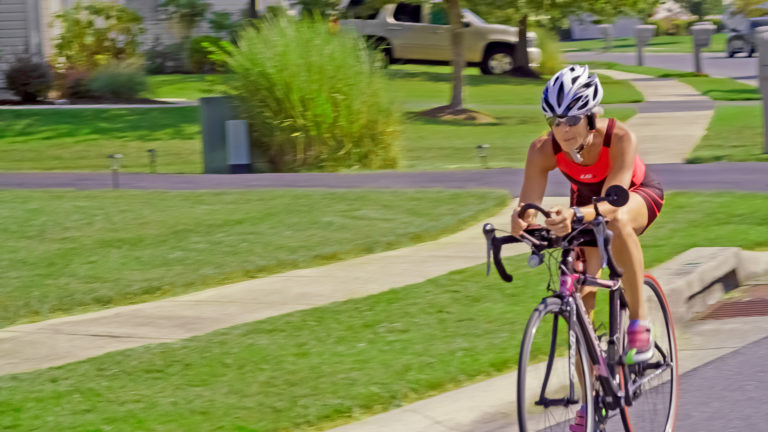 “I cannot believe how quickly I bounced back after this surgery.” And, while Jill says she is trying to ease back into her routine gradually, it seems the only speed she knows is fast. “I am so happy because, four months post-surgery, I was released by the doctor to run. And, I am proud to say that I recently completed a 5-mile race!” In the summer of 2019 Jill is scheduled to compete in a series of 5Ks – more than 10 races total – and she has already signed up for a biking and swimming competition in September.

Only a surgeon can tell if Lapiplasty® 3D Bunion Correction™ is right for you. As with any medical treatment, individual results may vary and this experience is unique and specific to this patient only. There are potential risks with surgery and recovery takes time. Potential risks include, but are not limited to: infection, discomfort from the presence of the implant, loosening of the implant, and loss of correction with nonunion or malunion